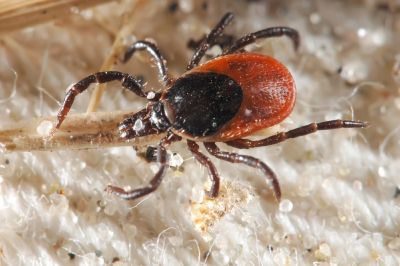 Ticks: how to protect yourself

Ticks can carry many diseases

Whether people are enjoying the beautiful outdoors in Missouri or elsewhere, Missouri Department of Health and Senior Services recommends awareness of diseases transmitted by ticks.

JEFFERSON CITY, Mo – Tick season is here and milder winters and warm spring temperatures could result in a higher numbers of ticks and tick-borne disease. National numbers recently released May 1 by the Centers for Disease Control and Prevention show that cases of diseases transmitted by ticks doubled from 2004 – 2016. In addition, new disease-causing agents that can be transmitted by ticks have been discovered in the past few years. Missouri is home to large numbers of ticks, which means that tick-borne diseases can pose a risk to persons who work or play outdoors.

"As with the flu, we stated in October it looked like it might be a difficult year with high rates of flu and potentially severe strains and encouraged everyone to get a flu shot. Unfortunately, we did experience a very tough flu season," said Dr. Randall Williams, DHSS Director. "Based on last week's CDC report, we are again reminding every one of the potential of tick-borne illness in Missouri and encouraging you to take simple precautions to lower your risk of tick bites and tick-borne illness." At least six different types of tick-borne diseases have been reported in Missouri residents, including Rocky Mountain spotted fever, ehrlichiosis, tularemia, Lyme or Lyme-like disease, and disease caused by Heartland and Bourbon viruses. The majority of these cases occur in May, June and July.

Symptoms of these diseases typically begin within two weeks of a bite by an infected tick and for most people include a sudden fever, body aches and headache. "As I often told patients, if you are experiencing flu-like symptoms in the summer when it is not flu season, you should talk with your doctor about the possibility of tick-borne illness," continued Dr. Williams. Another possible sign of tick-borne disease is fever and a pus-filled wound that appears at the site of a tick bite, or a spreading rash that follows a tick bite or exposure to tick habitat. Not all ticks transmit these infections, and not all tick bites lead to illness. The majority of Missouri's tick-borne illnesses can be successfully treated if they are caught early, but sometimes they are deadly.

As DHSS stated in April, everyone can safely enjoy the outdoors, whether at home or traveling, by using some simple precautions to avoid tick bites.

DHSS recommends the following precautions to prevent tick bites:
•Use an insect repellent with a minimum of 20% DEET, picaridin, or IR3535 on exposed skin and clothing. Choose a product that lasts several hours whenever you spend time outdoors. DEET products should not be used on infants under two months of age.
•When possible, wear protective clothing (light colored, long sleeved shirts and pants) when outdoors to keep ticks off skin.
•Avoid tick infested areas including brushy areas, tall grasses, wood piles and leaf litter. When hiking, stay near the center of trails to avoid ticks.
•Reduce ticks around your home by keeping lawns mowed short, shrubs and trees trimmed, and remove leaf litter, wood piles, fallen branches, trash and debris from yards.
•People with pets should talk with their veterinarian about use of tick prevention treatments. You should regularly check your pet for ticks.
•Check for ticks while outdoors and again after returning from the outdoors. If possible you should change clothes and shower soon after spending time outdoors.

If you find an attached tick, remove it promptly. The longer it is attached the greater the risk of infection. To remove ticks:
•Using tweezers, grasp tick near its mouth and as close to your skin as possible.
•Pull tick firmly, straight out, away from skin. Do not jerk or twist the tick.
•Do NOT use alcohol, matches, liquid soap or petroleum jelly to remove a tick.
•Wash your hands and the bite site with soap and water after the tick is removed. Apply an antiseptic to the bite site.

If symptoms occur following a tick bite, or even after exposure to a tick habitat, be sure to tell your health care provider. For more information visit www.health.mo.gov/ticks.